Orange County is home to nearly 100,000 Catholics of Vietnamese ancestry. A shrine honoring the Blessed Mother and the contributions of the Vietnamese people to the American Church will be an important addition to this emerging center of Catholic faith, thought, and culture. Garden Grove, Calif., (Dec. 7, 2016) – Shortly after the fall of Saigon in April of 1975, thousands of Vietnamese families fleeing persecution began to arrive at Camp Pendleton near San Diego in search of a new life. Orange County Catholics responded in faith by welcoming them into their homes and Churches by the thousands. After more than 40 years these same families have developed the largest and most vibrant center of Vietnamese culture outside of Vietnam. Vietnamese Catholics make up a large portion of this community and have prospered in Orange County over these many years, now pledging to raise funds to build a significant shrine to Our Lady of LaVang on the iconic Christ Cathedral campus in Garden Grove. These funds will also support the sanctuary and site renovations of the cathedral campus. “In my time as Bishop of the Diocese of Orange I have been inspired by the faith and energy of the Vietnamese people. They truly place faith in God at the heart of all they do. It is an honor to join them in working to build a fitting monument to their struggles, faith and community here at the center of our Diocese. Our Lady of LaVang is a revered symbol for Catholics and non-Catholics alike and will serve as a point of unity for the Vietnamese diaspora,” said the Most Rev. Kevin Vann, Bishop of Orange. A committee of prominent Vietnamese-American community and business leaders has been assembled to lead this effort. Additionally, a dedicated team of architects has also been retained to develop the aesthetic of the shrine to ensure it represents Vietnamese culture and tradition. This design team includes: Trung Trần, architect, GSD, Vietnam, Aaron Torrence, AIA, Torrence Architects, Đỗ Cung, conceptual design, and Rev. Martin Lâm Nguyễn, Art Professor, University of Notre Dame. “Our community has been profoundly blessed here in Orange County. The Blessed Mother has been a steady unifying force in the face of hardship in Vietnam and now in the United States. We are pleased to have the opportunity to create a shrine in her honor on the campus of Christ Cathedral. The prominence of this shrine on the campus of this international destination will be a point of pride, unity and faith for the Vietnamese people,” said Huan Le, MD, Chair of the Our Lady of LaVang committee. About Our Lady of LaVang Fearing the spread of the Catholicism, the Cảnh Thịnh Emperor restricted the practice of Catholicism in Vietnam in 1798. Soon after, the emperor issued an anti-Catholic edict and a brutal persecution began. Many people sought refuge in the rainforest of La Vang in Quảng Trị Province, Vietnam, and many became very ill. While hiding in the jungle, the community gathered every night at the foot of a tree to pray the rosary. One night, an apparition of the Blessed Mother dressed in the traditional Vietnamese áo dài, holding the infant Jesus in her arms, and flanked by two Angels of the Lord appeared to them in the branches of the tree. Our Lady comforted them and told them to boil leaves from the trees for medicine to cure their illnesses. In 1802 the Christians returned to their villages, passing on the story of the apparition in La Vang and its message. As the story of the apparition spreads, many came to pray at this site and to offer incense. In 1820, a chapel was built.   Pastoral Center: Communications Department 13280 Chapman Avenue Garden Grove, CA 92840 office: 714-282-3075         fax: 714-282-302
Back to Newsroom

In an elaborate ceremony accented by traditional Vietnamese dancers and a large outdoor Mass –the Vietnamese Catholic community will celebrate the progress made in realizing their dream of a shrine dedicated to Our Lady of LaVang in the heart of “little... 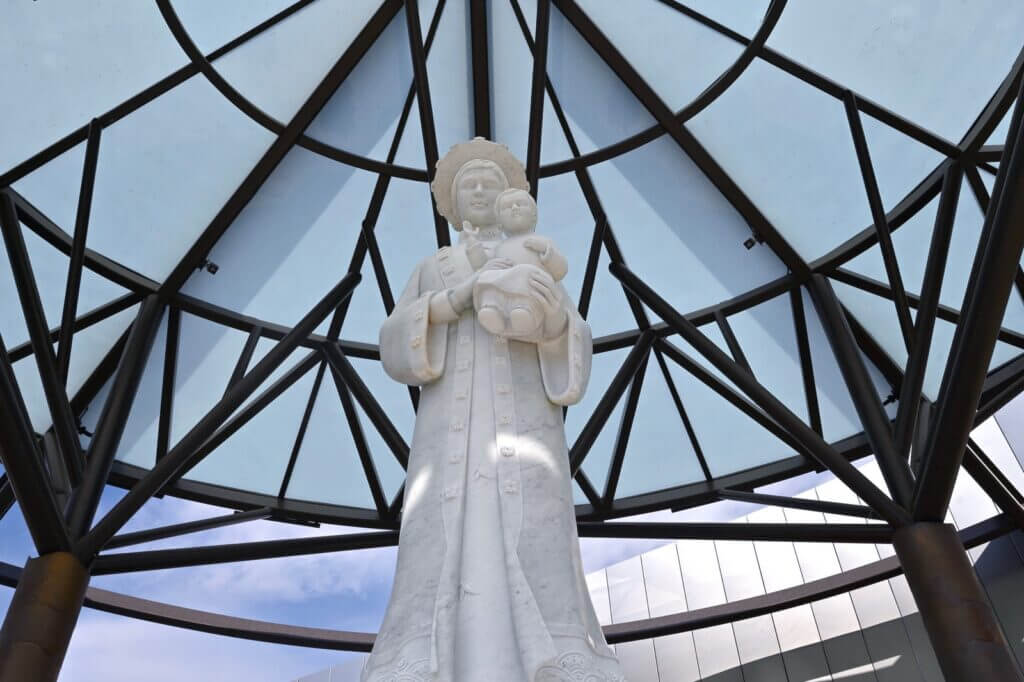 Our Lady of La Vang Shrine, Testament to the Journey of the Vietnamese-american People, to Be Unveiled at Christ Cathedral on July 17

First Mass and Rosary to Be Celebrated at Christ Cathedral’s Our Lady of La Vang Shrine, Testament to the Journey of the Vietnamese-american People