Bishop to Ordain 15 New Permanent Deacons for Diocese of Orange

The permanent diaconate has seen exponential growth in the U.S., growing from roughly 800 deacons in 1975 to more than 18,000 in 2012 Garden Grove, Calif., (Oct. 7, 2015) – The Most Rev. Kevin Vann, Bishop of Orange, will ordain 15 new deacons to serve the Roman Catholic Diocese of Orange during a Mass of Ordination at St. Columban Church in Garden Grove (10801 Stanford Ave), October 17, 2015 at 10 a.m. The role of the permanent deacon in the Catholic Church calls on an individual to dedicate himself completely to a life of Christian service through the Sacrament of Holy Orders. This lifelong commitment to service is primarily dedicated to charity and social justice. A deacon may also baptize, officiate at marriages and funeral services, assist and preach in the liturgy, and preside at various community devotions. A permanent deacon is an ordained minister that may be married, maintain their current job, and preserve their regular family life. “We are blessed to welcome so many new deacons into the permanent diaconate within our Diocese. These unique individuals will assist in serving the ever growing and important needs of our flock, with particular focus on the acute needs of the poor and marginalized in our community. They will continue the mission of the diaconate, striving to be a living reminder of Christ the Servant’s presence in the Church and world,” said Bishop Vann. The diaconate traces its roots back to the early days of Christianity. The founding of the diaconate is described in the New Testament within the narrative of Acts 6:1-6. This account describes the difficulty the Apostles faced in caring for the poor while evangelizing and preaching the gospel. In order to balance these obligations they appointed the first seven deacons to carry out this mission of service. “…It is not right for us to neglect the word of God to serve at table. Brothers, select from among you seven reputable men, filled with the Spirit and wisdom, whom we shall appoint to this task, whereas we shall devote ourselves to prayer and to the ministry of the word.” (Acts 6:2-3) The role of a permanent diaconate faded over the next several centuries until it was no longer practiced in the Catholic Church; it survived merely as a transitional step to priestly ordination. The Order of Deacon was restored by Pope Paul VI on the feast of St. Ephrem, the Deacon, June 19, 1967, in accordance with the will of the Second Vatican Council. The United States Catholic Bishops Conference (USCCB) reinstituted the permanent diaconate in 1968 following the Pope’s decree. Since that time the number of deacons has quickly grown from around 800 in 1975 more than 18,000 in 2012 according the Center for Applied Research in the Apostolate, Georgetown University. In the May 2, 1968 letter from the USCCB reinstituting the permanent diaconate, the bishops presented the following reasons for deaconate:   Candidates to be ordained: [email protected] 714-282-3075
Back to Newsroom 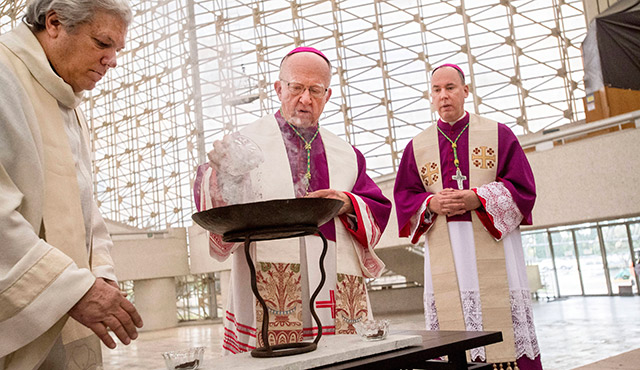 Bishop Kevin Vann to Ordain 17 Men As Deacons for the Dio-cese of Orange on Oct. 19 – First Diaconate Class Ordained in Christ Cathedral

Garden Grove, Calif., (Oct. 17, 2019) – After five years of preparation, 17 men will be ordained by Bishop Kevin Vann as deacons in the Catholic Church at 10 a.m. on Saturday, October 19 in Christ Cathedral. This is the first diaconate class to be...