Newsroom/First Mass and Rosary to Be Celebrated at Christ Cathedral’s Our Lady of La Vang Shrine, Testament to the Journey of the Vietnamese-american People

First Mass and Rosary to Be Celebrated at Christ Cathedral’s Our Lady of La Vang Shrine, Testament to the Journey of the Vietnamese-american People

Garden Grove, Calif. (Sept. 29, 2021) — The Roman Catholic Diocese of Orange will be celebrating the first Rosary and Mass at the Our Lady of La Vang Shrine on Saturday, Oct. 2, beginning at 8:30 a.m.

Saturday’s inaugural Rosary and Mass are the first of what will be a monthly occurrence at Christ Cathedral’s new shrine, which honors the Virgin Mary, serves as a testament to the Vietnamese-American people and recognizes Orange County’s Vietnamese diaspora of more than 100,000 people.

The Mass and Rosary will be in Vietnamese. An estimated 1,000 people are expected to attend.

The main celebrant is Bishop Thanh Thai Nguyen, who is currently the only Vietnamese bishop in the United States. The homilist is Fr. Christopher Pham.

The religious event will include a 120-person choir, as well as praying for donors and their families. It will be livestreamed for Catholics around the world on Christ Cathedral’s Facebook page and the Diocese of Orange’s YouTube account.

The Our Lady of La Vang Shrine was solemnly blessed on July 17, 2021, before a crowd of more than 8,000 supporters and others viewing the livestreamed event from around the world. The centerpiece of the $12.6-million shrine is an Italian white marble statue of the Virgin Mary holding the Baby Jesus. The Blessed Mother is depicted as she is believed to have appeared in 1798 in a remote rainforest in Vietnam before a group of persecuted Catholics.

That Marian apparition has since been named Our Lady of La Vang, and depictions of the Blessed Mother are considered a source of hope, faith and promise to Vietnamese Catholics around the world.

Although the shrine was blessed this past summer, a second phase of construction for it is pending. That will include rosary gardens, a basalt medallion and waterfall feature.

What: Inaugural Rosary and Mass at Our Lady of La Vang Shrine

Where: Christ Cathedral campus, 13280 Chapman Ave., Garden Grove. The shrine is near the Chapman and Lewis intersection of the property.

Visuals: An estimated 1,000 parishioners praying, celebrating the Rosary and Mass in front of the shrine. The shrine is a modern structure featuring a 12-foot-tall Virgin Mary statue. The iconic glass of Christ Cathedral is a backdrop.

Historical Background of the Our Lady of La Vang apparition

The Our Lady of La Vang Shrine is dedicated to the 1798 Marian apparition within the rainforest of La Vang, Quảng Trị Province, in the North Central Coast region of Vietnam. At the time, the Catholic people of Vietnam were suffering persecution, with many being martyred for their faith. Many fled to La Vang, where one night the apparition of a lady in a traditional Vietnamese áo dài dress appeared alongside two angels. She was holding a child in her arms. The apparition was interpreted to be the Virgin Mary holding the Baby Jesus.

The Blessed Mother spoke words of love and comfort to the persecuted Catholics and showed them how to make medicines from trees growing in the forest. A shrine to Our Lady of La Vang was eventually built of rice straw and leaves at the site but was burned in 1805 during an insurgency in which many Catholics were martyred. The shrine was rebuilt in 1900 and enlarged in 1928. Pilgrims from around the world journey to the site annually and many have reported miraculous cures. Our Lady of La Vang Shrine, Testament to the Journey of the Vietnamese-american People, to Be Unveiled at Christ Cathedral on July 17 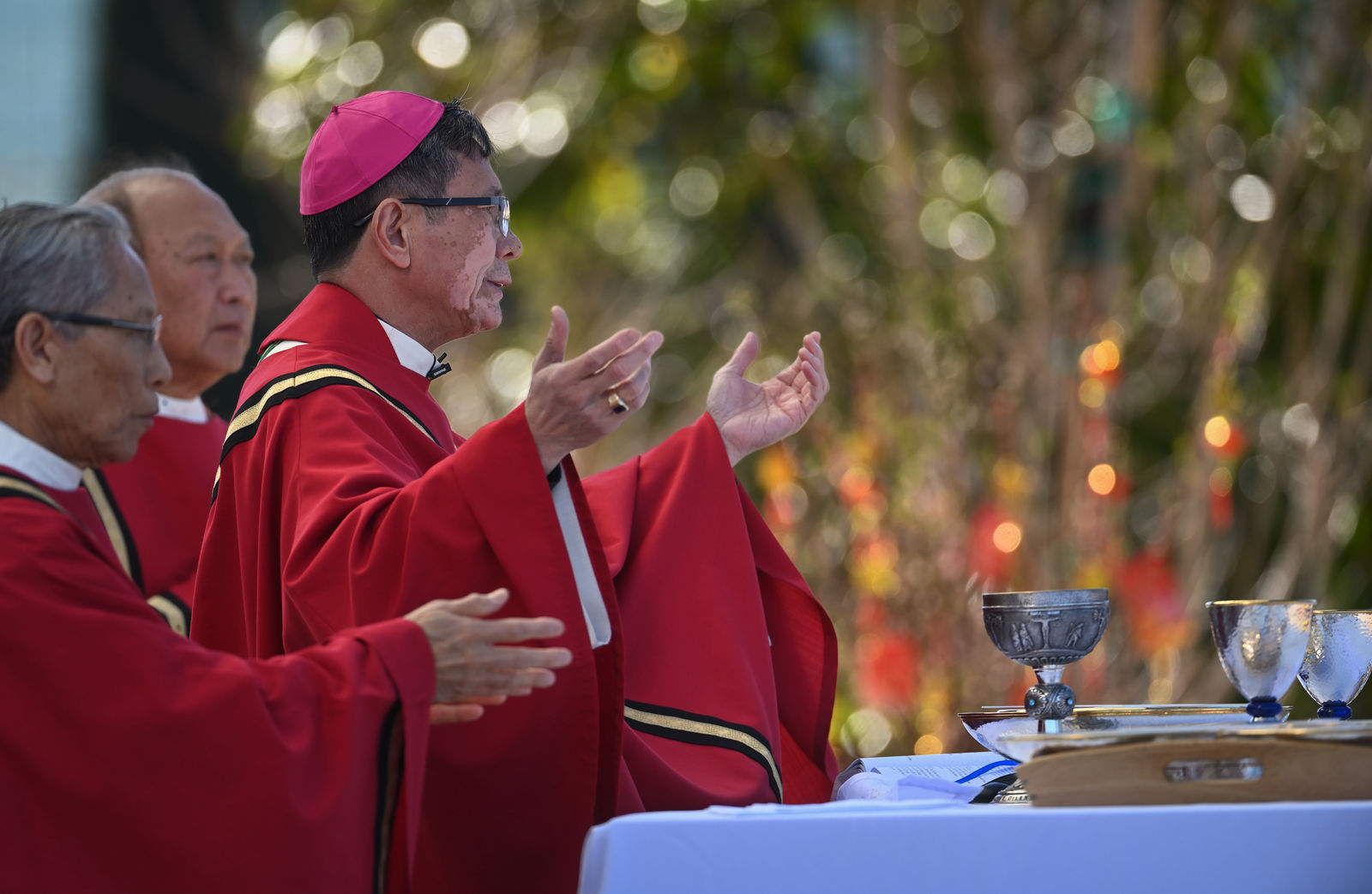 arrow_back
Video list
Menu
This site is registered on wpml.org as a development site.